Fiber optic cable uses light to transmit information. The fibers hold the signal and then a glass or plastic tube guides it on its way. Fiber is often used in telecommunications, but also has many other purposes including infrared surveillance, military applications, and medical procedures like heart surgeries.

Fiber optics is a technology that uses light to transmit data. It works by sending pulses of light through an optical fiber cable. The pulses are then converted into digital signals, which can be transmitted over copper cables and transmitted wirelessly. 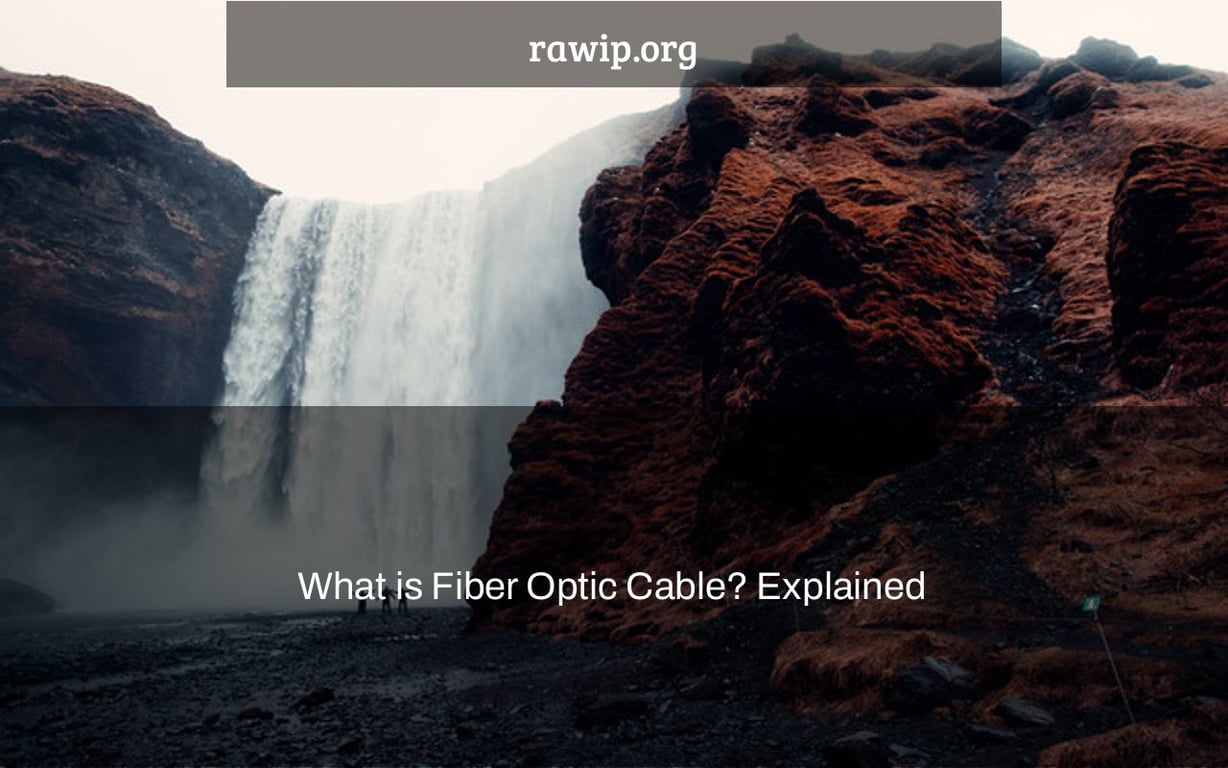 What Are Fiber Optic Cables and How Do They Work?

A fiber optic cable is made of glass strands. Each strand is slightly thicker than a human hair. Each strand has a core in the middle that allows light to pass through. Each core is surrounded by a second layer of glass called cladding, which bounces light inward to prevent signal loss while also allowing light to pass through the cable’s bends. Total internal reflection describes how light in a fiber-optic cable travels through the core (hallway) by constantly bouncing off the cladding (mirror-lined walls).

Coatings are the multiple layers of plastic that surround the fiber. These coatings act as a buffer, absorbing shock and adding an extra layer of protection.

In a network, multimode and single mode fiber has different transmission styles. Because of its larger core, some light beams may travel directly, while others may bounce off the cladding. Single mode fiber cables have a diametric core that is up to 5 times smaller than multimode cables. It only allows one mode of light to pass through the core.

Multimode fiber comes in two core lengths: 50m and 62.5m. Because of its relatively wide core, it can carry multiple data streams at 850nm or 1300nm wavelengths at the same time. Due to high dispersion and attenuation rates, multimode fiber is typically used to carry a high volume of data over relatively short distances. It uses a light-emitting diode (LED) or Vertical Cavity Surface Emitting Laser (VCSEL) as its light source.

Single mode fiber has much less internal reflection as light passes through it, which reduces attenuation and enables much faster data transfer over long distances. Multimode fiber cabling, on the other hand, dramatically increases the amount of reflection, resulting in higher dispersion and attenuation rates and, as a result, increased bandwidth delivery over shorter distances.

The core of all-fiber cables transports light to transmit data. The primary distinction between Fiber Cables: Single Mode vs. Multimode is the size of their cores. Single-mode fiber optic cables have a much smaller core diameter than multimode optical fiber cables. The 9-micron standard used in broadcasting and production reduces attenuation and allows signals to travel further. The multimode core diameters in A/V are 50 or 62.5 microns, allowing more data to pass through the fibers at the same time.

Breakout/Cable for distribution with a Tight Buffer

The Cable Breakout is also referred to as a fan-out cable. As shown in the diagram, a Cable Breakout is made up of two or more simplex cables bundled around a central strength member. Each fiber has its jacket, and they are all packaged together inside the same outer jacket. As a result, when running through building walls, Cable Breakouts can be separated into individual simplex cables for separate use. Cable Breakouts are typically designed with a tight buffer and fiber counts ranging from 2 to 24 fibers.

For direct connectivity, a tight-buffered Cable Breakout is the best option. Because each fiber has its aramid strength member for connector tie-off, the sub cables can be directly connected to equipment in most situations without fear of fiber damage or connector/fiber end-face damage. Look at the image below:

Tight-buffered Cable for distributions are simple to route and their 900m tight-buffered fiber allows for fast and reliable field terminations. The terminated fibers are placed in a patch panel, as shown in the image below, and jumper cables are used to connect the patch panel and equipment.

Why Fiber Cables Rather Than Copper Cables?

Fiber optic cable is a good alternative for business data networking and telecommunications because of its fast data transfer, smaller, lighter cables, and expanded signal range.

EMI is an acronym for “Electronic Music (Electromagnetic Interference)

Copper lines produce an electromagnetic field that may disrupt signals in other connections. Electromagnetic interference is not generated by fiber cables, on the other hand (EMI). They are also immune to EMI. You may set them right near to industrial equipment without fear of them being damaged.

The main benefit of optical fiber communication over electrical cable connection is its high bandwidth capabilities (almost 10Gbps) across extended distances owing to exceptionally low loss at the same particular wavelengths (e.g. 1.3 um and 1.55 um). Fiber also minimizes latency, resulting in faster download and upload speeds as well as quicker access to resources. Fiber can also transfer data over extended distances without generating delays or disruptions due to its low loss.

Using a number of monitoring approaches, such as monitoring real power transfer or pilot signal transmission, a broken or damaged optical fiber may be recognized rapidly. If a copper wire carrying a current is broken, old, or worn, it might totally short out or even spark a fire if it is not monitored properly.

Fiber cables are about a fourth the diameter and weight of copper wires, making them simpler to install and allowing for improved ventilation in rack enclosures. Fiber optic cable is also unaffected by temperature fluctuations, severe weather, or moisture, unlike copper lines. A fiber optic cable’s true lifetime should be at least 10 years, although they typically survive considerably longer.

SC is a push-pull device that uses a ceramic ferrule to offer very exact alignment in a fiber-optic connection. SC connections have a strong snap-in locking mechanism that locks with a simple push-pull action. They are a low-cost, long-lasting alternative capable of 1,000 mating cycles. This connection is capable of both simplex and duplex operation. The new SC connections make installation even easier, increase yield, and deliver insertion and return loss performance that is similar to factory-terminated connectors.

The LC, which is similarly a push-pull connection, has a smaller ferrule and employs a latch rather than the SC locking tab, making it a tiny form factor connector. Its tiny size and latching feature make it excellent for densely crowded racks/panels, and it has half the footprint of the SC connection, making it particularly popular in datacoms and other high-density patch applications.

An FC connection has an all-zirconia ceramic ferrule for durability. They feature a high-performance thread mounting method and a keyed body for repeatability and interpretability. They’re typically employed in telephone, instrument, and high-speed communication networks using single mode fibers. The design is similar to a ST connector, but it features a threaded connection that makes it more suited to high-vibration settings.

AT&T developed the ST connectors shortly after the FC arrived. They are commonly used in fiber optic networking applications. They can be used for both short-distance and long-distance applications. Stick and twist is an older technology, but it is still widely used on data networks and has a large install base.

Fiber optic cables have a wide range of uses. Telephone transmissions, Internet communication signals, and cable Television signals are all sent via them by telecommunication firms.

In a variety of network configurations, optical fibers are used to link servers and users, as well as to increase data transmission accuracy and speed. Fiber optic cables are lighter, less bulky, and more flexible than typical copper wire, and they can transmit massive volumes of data at extremely fast rates. As a consequence, fiber optic cables are becoming more popular for internet connections.

Following Mercedes-successful Benz’s introduction of plastic optical fiber (POF) in automotive networking systems in 1998, the Media Oriented Systems Transport (MOST) standard was established, which is a reliable and resilient network protocol for optimal multimedia enjoyment and information. Both the outside and inside of autos are illuminated using fiber optic wires. They are crucial in terms of illumination and safety precautions. Fiber optic connections can transport signals at fast rates between various elements of a vehicle.

Fibre distribution methods benefit both TV broadcasters and their consumers in a variety of ways. They are perfect for signal transmission for HD TVs since they have greater bandwidth and higher speeds. Furthermore, fiber optic cables cost less than copper lines.

Optical communication is crucial in endoscopy (non-intrusive surgical methods). A tiny, bright light is used to illuminate the operation region within the body, enabling the number and size of incisions to be reduced. Fiber optics are also used in biomedical research and microscopy.

Data Storage in the Cloud

As cloud computing becomes more widespread, there is a larger need for data capacity and increased bandwidth. Because cloud computing solutions are internet-based servers, their performance and productivity are reliant on your internet connection. To take advantage of the cloud, many firms are converting to fiber-optic access. Insufficient bandwidth would render cloud computing inefficient.

What is the Best Way to Clean Fiber Optic Cable?

Before installing fiber optics, it is necessary to clean them. A new cable does not ensure that it will be clean, and the installation procedure might add dust and other pollutants. Always clean the end of a fiber optic cable before putting it into a connection. Free connections on a fiber optic patch cable or fiber pig-tail, and connectors inserted into patch panels or other hardware devices and equipment, are the two kinds of fiber optic connector applications that need cleaning. One of numerous ways may be used to clean fiber optic cables. Here’s an example of a cleaning procedure you may use:

Blow the surface of the fiber with CDA to remove any bigger, loose particulates.

Place a few drops of a suitable cleaning solution, such as spectroscopic-grade isopropyl alcohol or methanol, in the middle of the lens tissue.

Gently grasp the fiber by the cord or connection. Slowly transfer the moist tissue slice over the fiber by placing it on the optical surface.

In bright light, examine the fiber surface using a magnification, video inspection tool, or optical loop. Repeat the operation with fresh lens tissue if any impurities or streaks are evident.

To avoid recontamination, place a protective cover on the end of the cable or reinsert the fiber after cleaning.

Use great care and follow the directions below to prevent harm during the cleaning process: Do not tilt the CDA can when blowing, as this may result in the leak of liquid, contaminating the fiber surface. Dry lens paper is quite abrasive and should be avoided at all costs. Cleaning fiber optic surfaces with acetone is never a good idea. The liquid may be contaminated if the lens tissue is inserted into the methanol or isopropyl alcohol. Instead, dribble the cleaning solution onto the tissue.

Fiber optic cables are made up of thin strands of glass or plastic that transmit light. The light is transmitted through the cable by a process called total internal reflection. In 1852, British scientist Sir Charles Wheatstone discovered the principle of total internal reflection while experimenting with a microscope. He found that when he placed a metal prism in front of an object and shone sunlight on it, the light would be divided into its component colors as it traveled through the prism and then travel out again to form an image on a screen behind the prism. Reference: who invented fiber optics.

How to Fix Netflix Not Working on Roku